After the first two heats at the World RX of Canada, round seven of the FIA World Rallycross Championship presented by Monster Energy, it’s Timmy Hansen that leads the way for Team Peugeot-Hansen.

Sweden’s Hansen took the heat one victory and followed it up with a second fastest time in heat two.  EKS driver Mattias Ekstrom is placed second overall while Davy Jeanney is third in a second Peugeot 208 WRX Supercar.

Reigning World RX Champion Petter Solberg had a difficult start when his Citroen DS3 Supercar suffered from an exhaust manifold problem and saw him placed 16th at the end of heat one.  The SDRX team worked hard to repair the car and Solberg went on to take the heat two victory, 2.7 seconds faster than Hansen. He lies fifth overnight.

Solberg explained: “There was something strange showing in the data following practice so we decided to change the engine – I didn’t want to take any risks with the Championship to think about. I had to do a manual start in heat two as we’re still having some mapping issues – the pace was good but we need to sort the problems before tomorrow.”

Leader Hansen was pleased with his performance but admitted he was analysing today’s data to see where he could improve tomorrow. “I think I can make up some time on the final corner so this is what I’m going to concentrate on,” explained the 22-year-old. “The track is much better this year, it’s very technical – you really need to think about what you’re doing but I love it and the 208 is really well suited to this track. During free practice we lost the rear wing, and put us on the back foot for heat one but everything is feeling good with the car and I’m feeling confident for tomorrow.” 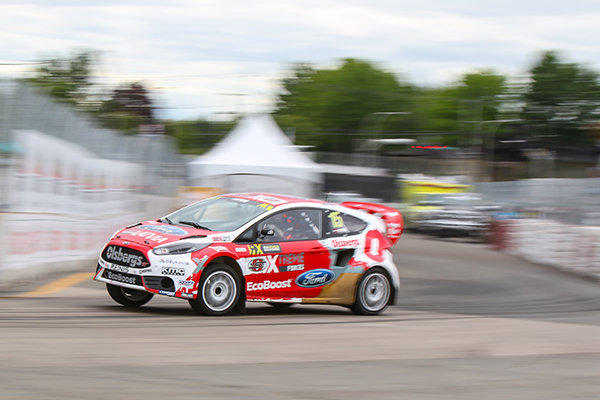 One of the most impressive drives of today, however, was that of Tommy Rustad who is driving the ALL-INKL.COM Muennich Motorsport prepared Audi S3 for the first time.  “The Audi is very different from the Polo and this is a new track for me which is an added challenge, but I’m starting to get the hang of it – especially on the asphalt,” explained Rustad, who is eighth after two heats.

Canadian drivers LP Dumoulin and Patrick Carpentier had a day of mixed fortunes in their JRM Racing prepared MINI RX Supercars.  Carpentier outbraked himself in heat one and was forced to retire, while Dumoulin was hindered due to a crack in his car’s engine. The Canadian NASCAR Champion took up the story: “We were dropping power quite a lot in the last couple of laps and I was having to drive conservatively. There was nothing we could do between heats one and two, there wasn’t enough time – but the team will try to work on it overnight. Despite everything, I’m sure having a lot of fun!” 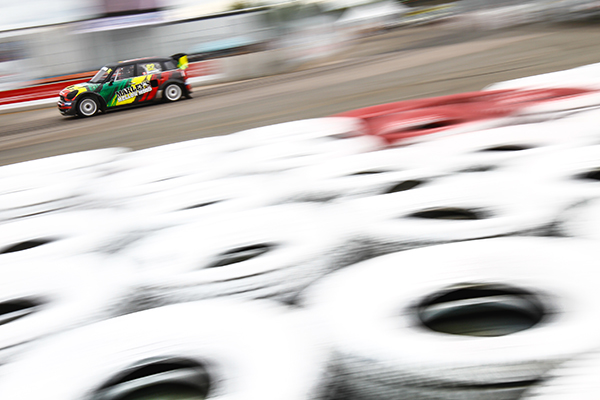 Elsewhere, World RX Team Austria’s Christoph Brugger suffered turbo problems while Robin Larsson was unable to start heat two due to a broken driveshaft.  It was a tough day for Volkswagen Sweden too as Tord Linnerud was unable to start today’s heats due to mechanical problems.  Meanwhile his team-mate Johan Kristoffersson suffered a setback in heat two after an impact with Nitiss on turn one.