Ekstrom – who drives an Audi S1 EKS RX quattro for EKS – was placed fourth after Q4, the Swede having suffered from a puncture and a small engine problem.  He fought back, however, to win his semi-final and a clever use of tyre strategy saw him fastest off the line in today’s final – which also awarded Ekstrom with the coveted Monster Energy Super Charge Award. 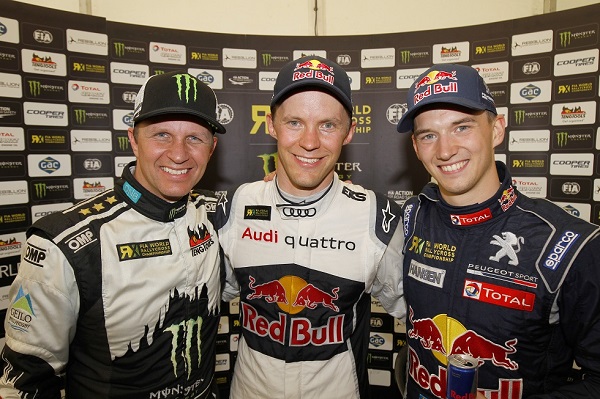 “I think the secret to winning this year was losing last year,” joked Ekstrom, who lost out on the Lydden Hill victory in 2015 by three tenths of a second. “But now it’s me on the top step, and not Petter [Solberg].  I think this weekend has been one of the hardest in my career – I couldn’t figure out why Petter was quicker and it was quite frustrating.  In the end, it came down to the joker lap and tyre strategy – I had a bit more rubber left towards the end.  Realistically, five or six drivers could win the Championship – Sebastien [Loeb] was very quick this weekend but was unlucky and we can’t underestimate the potential of the Peugeots.”

Runner-up Solberg added: “It’s been a great weekend – we tried so hard in the final, but we had a different tyre strategy which obviously didn’t work for us. The victory was in touching distance – we could see that the pace was there, we had the power and the suspension worked brilliantly. There has been a lot of close fighting but I always want to win the final race.  Congratulations to Mattias – his joker lap tactics worked well, I could almost reach him but it wasn’t enough.  The most important thing for me is that we are back on form – the car is working well, we have the speed and now it’s time to win again.” 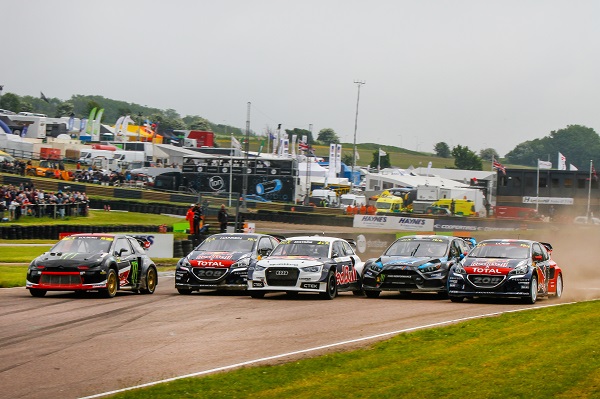 Hansen – who has not been on the podium since World RX of Turkey last year – was delighted to leave Lydden Hill with some more silverware. “It’s been a while since I’ve been in the top three so it feels great to be back in the end of race press conference,” admitted the 22-year-old Swede.  “Our lap times were good this weekend but we were down on Petter and Mattias so it meant we couldn’t afford to make any mistakes elsewhere.  I had a few chances to catch Petter in the final but didn’t quite get the speed. We are getting there but need to work even harder when we go to Norway in two weeks’ time.”

Hansen’s younger brother Kevin finished fourth overall – a remarkable achievement for the talented Swede who celebrated his 18th birthday over the weekend. Fifth place was taken by Russia’s Timur Timerzyanov – the best result for the World RX Team Austria driver since Italy last year.  Hoonigan Racing Division’s Andreas Bakkerud was second at the Intermediate Classification stage but was denied a podium spot due to technical problem with the car – he eventually finished sixth.

Topi Heikkinen was seventh for EKS. EKS remains top of the teams’ standings after round four – 56 points ahead of Team Peugeot-Hansen who are second. Team Volkswagen Sweden’s Johan Kristoffersson finished eighth at Lydden Hill, unable to reach the final due to a puncture. Kevin Eriksson [Olsbergs MSE] and nine-time World Rally Champion Sebastien Loeb were ninth and tenth respectively.

France’s Davy Jeanney narrowly missed out on a place in the semi-finals and finished 13th. America’s Tanner Foust didn’t race in either of the two qualifying races on day two due to technical issues with his Volkswagen Polo.  Home favourite Liam Doran had hopes of making today’s semi-finals but was hampered by a puncture in Q1 and struggled with engine problems.

The British Bomb explained: “It’s been a mega frustrating weekend as I was obviously hoping for a lot more in front of my home fans. I really didn’t get the chance to build any momentum during qualifying and that’s so crucial in World RX if you’re going to make it to the semi-finals. The focus now turns to Norway and showing what the MINI RX can do in its new spec. The potential in the package is unreal and the JRM boys are working flat out – we just need a good run of luck so we can demonstrate the performance on track.”

In the third round of the RX Lites Cup, it was Frenchman Cyril Raymond who took the overall victory.  Thomas Bryntesson finished second, the Norwegian making a spectacular comeback after starting on the back row of today’s final. Simon Olofsson was third. In the overall RX Lites standings, Raymond leads – three points ahead of Bryntesson, who won the first two rounds.

In the Super1600 Championship, where Lydden Hill formed the second round of the support category, it was Hungary’s Krisztian Szabo who took a lights-to-flag victory in his Skoda Fabia. Artis Baumanis and Josef Susta finished second and third respectively. Szabo leads the S1600 crews after two rounds, eight points ahead of Denmark’s Ulrik Linnemann.

The fifth round of World RX takes place at Hell in Norway in two weeks’ time (10-12 June).