Trogen’s season started from second race in Hungary as he celebrated his 14th birthday by then. He won his first ever Rallycross Challenge Europe race and was second in season’s third race in Lithuania. Situation looked very promising in overall as well because he was third in standings. So possibilities were very good. However, sky turned black after Lithuanian race. – We got a message from the series where they stated that FIA has prohibited me participating to next race due to wrongly granted license. According to rules i should have been 14-years old in the beginning of the year when license has been granted. We were in assumption that i can start after my 14th birthday in May. This was the mistake what FIA cannot accept and they will remove my license, tells disappointed Sami-Matti Trogen. Trogen has got help from his own federation in Finland but in spite of their efforts the decision is final. That means end of racing in the European series for the season 2016. 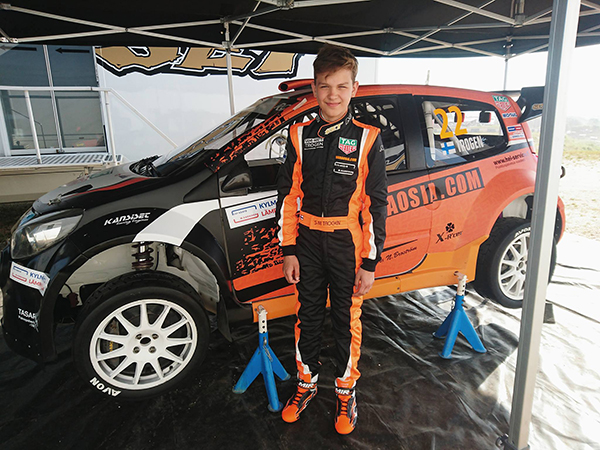 I am very sorry because of my sponsors and fans, but i promise to continue working for my career and this just gives me extra strength for future races – says Trogen. Sami-Matti’s father has been in every race so far supporting his son, also he is very disappointed. – It is still difficult to believe that young talent’s career is slowed down like this, but on the other hand i understand that rules are rules. It is a pity how small thing finally caused end of the season, only four months. Most annoying thing is that we have worked very hard to compete in European series. Workload done by us and our support team has been enormous, but it did not affect decision – says father Mika Trogen. Season does not end here and target is set to other places. Sami-Matti Trogen will continue in Estonian Rallycross series until the end of the season. He is in the lead by two points even though he had to skip one race due to scheduling issues. Next race is held in Pärnu on the coming weekend. Also development work continues with Set Promotion team. Co-operation between team and talented Sami-Matti is just in the beginning and despite small backslash work towards top of the world continues as earlier. Set Promotion team will take Sami-Matti ahead with his career and project continues – states team’s manager Jussi Pinomäki.