Reigning Champion Mattias Ekstrom has won round one of the 2017 FIA World Rallycross Championship presented by Monster Energy in Barcelona after taking a lights-to-flag victory at the wheel of his Audi S1 EKS RX quattro. Germany’s Timo Scheider finished runner-up in his MJP Racing-run Ford Fiesta RXS Supercar after a stunning drive which saw the German also finish as top qualifier at the Intermediate Classification stage. Hoonigan Racing Division’s Andreas Bakkerud was third in the Ford Focus RS RX Supercar.

“Yesterday was probably the most challenging of my RX career,” admitted Barcelona RX winner Ekstrom.  “But today we turned it around – to have a good, clean Q3 and Q4 race and to be in pole for the semi-final was key.  I have to say I am super impressed with Timo – to come from a privately-run team and to be leading after Q4 is very impressive.  I think we will see the most evenly matched year in World RX so far and I’m really excited to see so many cars in the series and with such little time difference between them – it’s going to be a fantastic season ahead.” 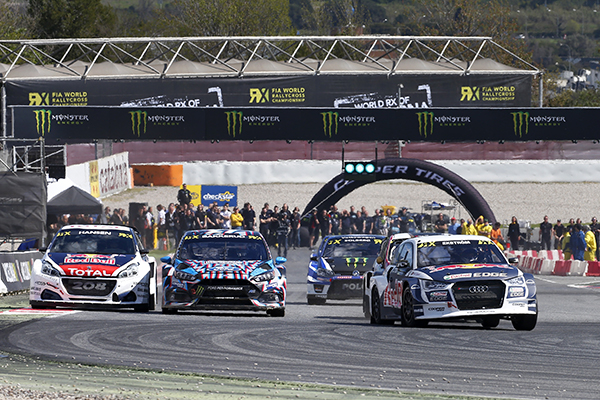 As well as winning the event, Mattias Ekstrom also takes home the coveted Monster Energy Super Charge Award – a trophy awarded to the driver who has the quickest reaction time off the lights during the event’s final race.

Runner-up Scheider became only the 11th person ever in World RX history to finish as Top Qualifier [TQ] at the end of the event’s four qualifying sessions.  The two-time DTM Champion took up the story: “I was very surprised to be TQ after barely any testing before we got to Barcelona.  It is awesome and I have to thank the team for all their efforts – we came to Spain with no expectations and to have been in the final was amazing.  This is one of the most special moments in my racing life.  I have to say I am very impressed with the car but I still have a lot to learn so we are testing tomorrow and also later in the week.  I have spent 16 years in DTM but right now I am loving life in rallycross.” 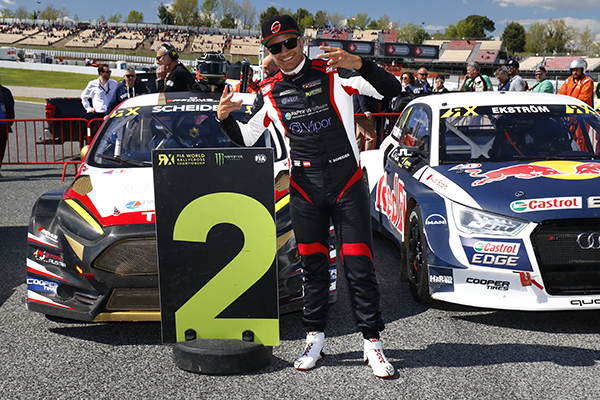 Third-placed Bakkerud had a troubled opening day after he crashed in turn one and was unable to complete the rest of Q2. Bakkerud explained: “Yesterday was difficult and my heart sank after what happened but today has been a totally different experience.  After the whole team has worked so hard over the winter with the car, it is great to be able to reward them with a step on the podium.  It is great to have been up there fighting with the DTM drivers – in rallycross, we have drivers from track racing, drifting, rallycross and all forms of circuit racing so it is great to be on the podium with two DTM stars and at a Formula One venue.  There is so much competition now in rallycross with five different manufacturers – I love this sport and it’s awesome so see so many new drivers this season. It’s also great to see private drivers enter and do so well so a big well done to Timo.” 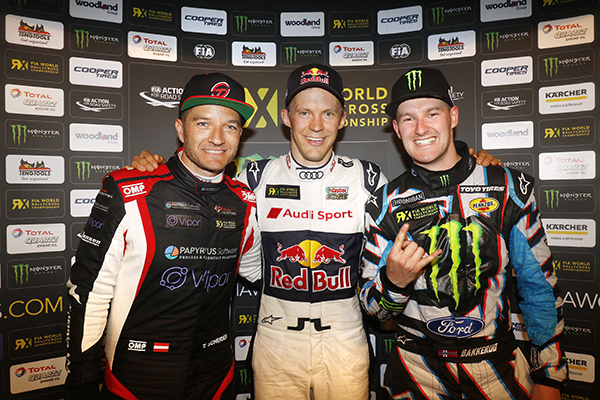 PSRX Volkswagen Sweden’s Petter Solberg and Johan Kristoffersson now lead the teams’ standings after both drivers reached the final and scooped the most points collectively. After winning semi-final one, Kristoffersson started on the front row of the final but his Volkswagen Polo stalled on the start line which meant the Swede was unable to catch the rest of the pack for the remainder of the race, eventually finishing sixth. Solberg was running third until Bakkerud overtook the two-time World RX Champion on the first corner of the fourth lap.  Solberg ended the race in fourth place with Team Peugeot-Hansen’s Timmy Hansen fifth in the Peugeot 208 WRX Supercar. 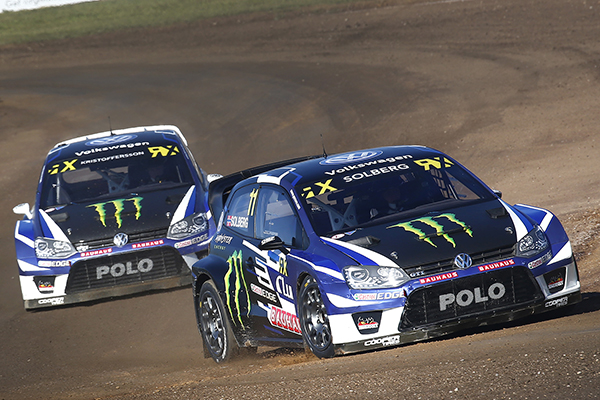 Elsewhere, nine-time WRC Champion Sebastien Loeb did not reach the semi-finals after a spin in Q3 due to a broken driveshaft.  America’s Ken Block made today’s semi-final but was denied a spot in the final after finishing fourth in semi-final one having taking his Joker Lap on lap five and losing a position.

In round one of the FIA European Rallycross Championship for TouringCar, it was Sweden’s Philip Gehrman who took the win in his Ford Fiesta.  Anders Braten and Per Magne Royras finished second and third respectively to make it a Norwegian one-two-three.

Paul Bellamy, World RX Managing Director for IMG, commented: “We’ve got an ultra-competitive grid in 2017 and today we saw four different manufacturers represented in the final which is fantastic for our sport.  Congratulations to Mattias for winning the first round of the season, which was thoroughly deserved after a strong performance from EKS throughout the weekend.  We had a crowd of 25,000 over the weekend which is an excellent start to our season.  With the amount of talent in World RX this year, it’s fair to say that a number of drivers could lift the drivers’ trophy at our season-closer in Cape Town from 11-12 November.”

The FIA World Rallycross Championship presented by Monster Energy will resume in Portugal in three weeks’ time (22-23 April) as World RX travels to Montalegre for round two.