Sweden’s Mattias Ekstrom has won Bompiso World RX of Portugal, round two of the FIA World Rallycross Championship presented by Monster Energy.  It is the second victory in a row for Ekstrom and sees the EKS driver extend his lead in the overall driver standings by 14 points over second-placed Johan Kristoffersson.

Team Peugeot-Hansen’s Sebastien Loeb finished runner-up this weekend, while PSRX Volkswagen Sweden’s Kristoffersson took the third podium spot.  In the teams’ championship, PSRX Volkswagen Sweden continue to lead the standings after both Kristoffersson and Petter Solberg made today’s final. Solberg, however, was slowed by a puncture in the final and finished the event sixth overall.  After a strong outing in the Peugeot 208 WRX Supercar Timmy Hansen ended the weekend fourth overall, with EKS driver Reinis Nitiss rounding out the top five.

“That was one of the hardest fought wins in rallycross,” admitted Ekstrom who also secured the coveted Monster Energy Super Charge Award after his rapid reaction off the line. “We weren’t on the pace throughout the qualifying process – both Johan and the Peugeots were very fast – but we concentrated on our own work.  In rallycross you have to fight until the bitter end, which is what we have proved today.  I’m super happy for myself but also as a team owner – it’s fantastic to have all three cars in the semi-finals and it’s a huge step forward.  I had a hungry Frenchman [Sebastien Loeb] on my bumper in the last lap but he is a fair racer – I managed to defend and it was a very enjoyable fight.  Next we have Hockenheim where once again I will compete in both DTM and World RX in the same weekend – it is a great opportunity to showcase our sport to the German fans and I expect a lot of spectators.” 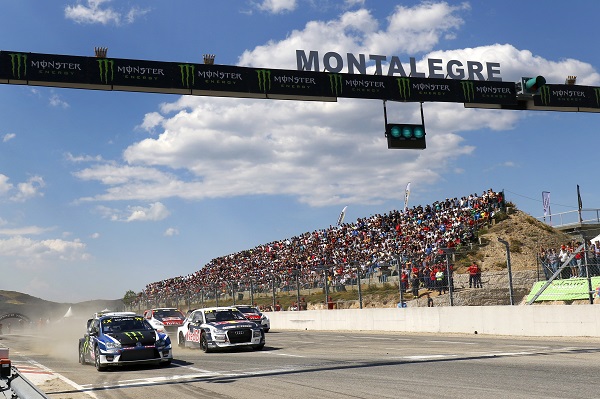 Runner-up Loeb echoed Ekstrom’s comments about fair racing. “It was a great final – at the end I could see that Mattias had made a small mistake so I tried to make the most of the opportunity and get as close as I could.  We were side by side towards the end but I would have had to push too hard to get past and that wouldn’t have been right. As Mattias said, we like to be fair racers and he did a very good job so deserves this win.”

Loeb – who has moved up to sixth in the overall driver standings – added: “After a bad start in Barcelona when I left the event with only three points, it was very important that I did well this weekend.  This is a good result for the whole team. We were struggling a bit yesterday and I got caught behind Kevin [Eriksson] in Q3 but found the right set-up for the semi-final and was really on the pace. The speed of the car is very good and that has been the main thing we’ve been looking for.  We need to make some small changes to the car’s balance and then we will be able to fight again in the next few races.”

Kristoffersson proved the man to beat after day one after winning the first two qualifying sessions but a misunderstanding between the Swede and the spotters’ tower meant he failed to take the Joker Lap during Q3, resulting in a 30 second penalty.

Kristoffersson took up the story: “Yesterday was about as good as it could get, but in Q3 we missed the Joker and then in Q4 we lost out because the track wasn’t as dry. In the final, I had a plan to stay behind Petter but unfortunately he had a slow puncture on the left rear and was losing a lot of time.  I managed to get past him on lap three which meant I had three laps to drive as fast as I could and I successfully closed on Timmy [Hansen].  We’ve made some good improvements since Barcelona, especially with the launch and it feels great to give Volkswagen its first podium of the season.” 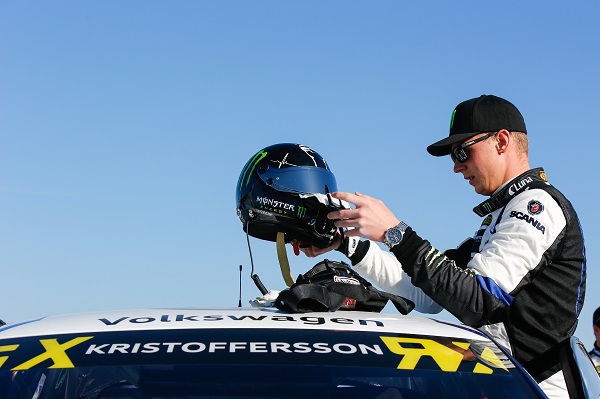 Elsewhere, Hoonigan Racing Division team-mates Ken Block and Andreas Bakkerud both qualified for the semi-finals but Q4 winner Bakkerud damaged his suspension in semi-final two, resulting in retirement. Block finished fifth in semi-final one, one spot behind Kevin Hansen who was fourth in the same race.

2017 newcomers STARD had both its drivers [Timur Timerzyanov and Janis Baumanis] in the semi-finals for the first time.  Timerzyanov had a difficult start in the first semi-final and was unable to make up the time he lost while Baumanis broke his car’s wheel in semi-final two.

In the Super1600 championship – where Montalegre marked the first of six rounds – it was Denmark’s Ulrik Linnemann who triumphed in his Peugeot 208. Reigning S1600 Champion Krisztian Szabo took the runner-up spot, while Latvia’s Artis Baumanis finished third.  Timur Shigaboutdinov would have finished third but was given a five second penalty for pushing and overtaking in the final. He eventually finished fifth, one spot behind Kasparas Navickas.

The third round of World RX takes place at the Hockenheimring in Germany next month (5-7 May) as the World Championship joins DTM for a thrilling weekend of motorsport action.