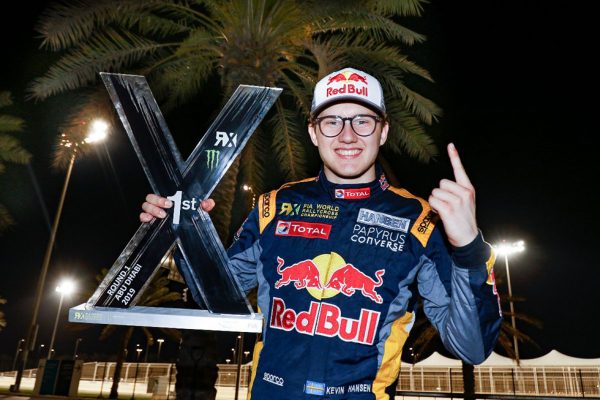 Kevin Hansen recorded a maiden World RX victory in Abu Dhabi – in a dramatic opening round of the 2019 FIA World Rallycross Championship presented by Monster Energy – under the bright lights of Yas Marina Circuit.

In a weekend largely dominated by the Team Hansen MJP Peugeot 208s – for a variety of reasons – Kevin took the honours after original race victor Niclas Gronholm was handed a three-second penalty for a coming together with Hansen in his GRX Taneco Hyundai i20.

Earlier in the day Kevin Hansen had topped the order after an eventful qualifying round. His elder brother Timmy, who had dominated day one in the sister Team Hansen MJP car had a big impact with the Monster Energy RX Cartel Audi S1 of Andreas Bakkerud in Q3 at the entry to turn one. 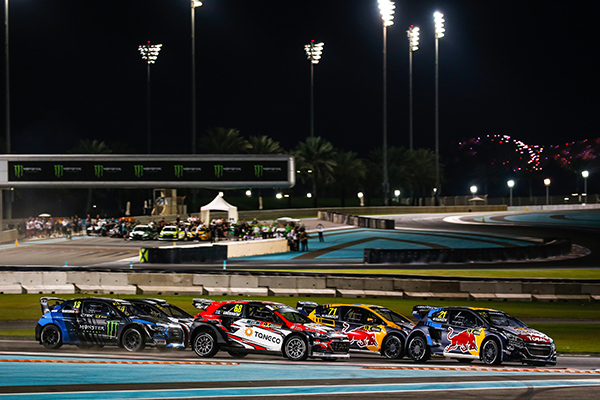 Bakkerud was disqualified after being deemed at fault following a stewards’ enquiry meaning both he and Timmy Hansen, whose car suffered extensive damage to the left-hand side, did not progress to the semi-finals.

For the younger Hansen, the victory was bitter-sweet given the incident involving Timmy. “It feels completely crazy,” Kevin said. “I took the start in the final and led about five laps and then after turn 10, Niclas gave me a tap and I nearly spun and lost the lead.

“A win in the stewards’ room is not the perfect way. It has been a great job by all the guys in the team to get the cars here and prepared. But this one is for Timmy as he should have been on the podium.”

Gronholm was disappointed not to have taken the spoils. “It was not an intentional hit but sometimes the stewards look at things differently to us so I have to accept it, move on and fight back in Barcelona,” he said.

Liam Doran in the Monster Energy RX Cartel Audi S1 claimed his first podium by taking third. The Briton said: “This result is from pure determination and nothing else. I started off poor to be completely honest, struggling with the setup of the car a bit.

“I just got my head down. I got into the semis by the skin of my teeth but you never give up until you get to the end.”

Janis Baumanis in the Team STARD Ford Fiesta also caught the attention of the stewards and was demoted from fourth to fifth just behind the World RX debutant Krisztian Szabo in the EKS Sport Audi.

Former DTM champion Timo Scheider, in the ALL-INKL.COM Muennich Motorsport Seat Ibiza, despite running strongly over the two days, finished sixth after a difficult final for the German.

The World RX final rounded out a three-day urban festival of world-class motorsport and off-track entertainment that included A-list musical artists and plenty of fan activity.

The GC Kompetition squad had an eventful two days with Guerlain Chicherit and Anton Marklund just missing out on a place in the final.

Oliver Bennett made a dramatic exit in Q3 when he rolled his Xite Mini Cooper.