Kevin Hansen beat the world’s best in Barcelona today (24 July), as the 2021 FIA World Rallycross Championship got underway in spectacular style in Spain with sensational racing across the board and a breathtaking battle for World RX honours.Hansen was already a winner in the series arriving at the Circuit de Barcelona-Catalunya, but his previous success – in Abu Dhabi in 2019 – came as a result of a penalty for the on-track winner. This time, the Swede triumphed entirely on merit after a pulsating performance for the family-run Hansen World RX Team.

For the majority of the weekend, Hansen closely shadowed elder brother Timmy as the two Peugeot 208s topped the intermediate classification at World RX of Catalunya. Behind them, however, a threat was lurking – a threat in the shape of three-time world champion Johan Kristofferson. 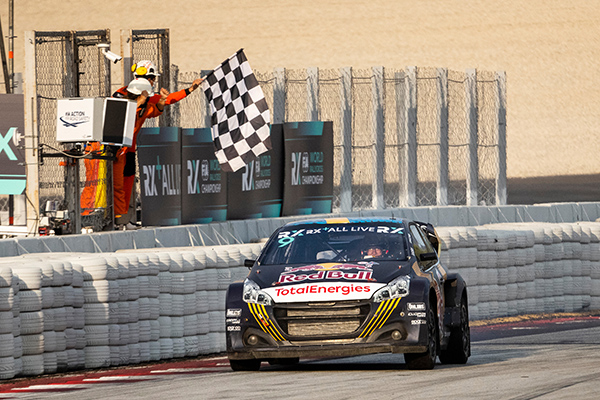 Entering the season as the defending title-holder, the KYB EKS JC ace was left on the back foot yesterday as a Q1 disqualification – after his data-logger was found not to have been connected – left him down in an uncharacteristic 15th position.

Proving just why he is the most crowned competitor in World Championship history, however, the Swede went on to win all three subsequent qualifiers to haul himself up to sixth place after Q4 – and back in the hunt.

That set the scene for a dazzling duel in the second semi-final, as Kristoffersson tried every which way to pass the younger of the Hansen brothers over the last two laps in a phenomenal fight, but the Peugeot driver stuck stubbornly to his guns and refused to yield, setting up an all-Hansen front row for the final following Timmy’s victory in the first semi-final.

After gaining a spot to third at the start, Kristoffersson then deployed an early joker tactic to try to get the undercut on the Hansen duo but found himself covered off by Timmy. 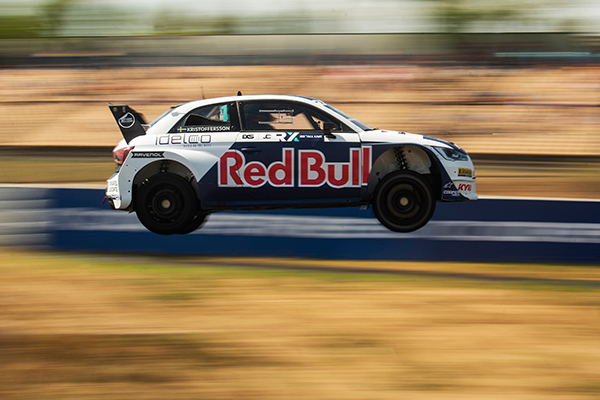 The pair both emerged from the joker behind GRX-SET World RX Team’s Krisztián Szabó, though, and the subsequent delay – allied to a rapid turn-of-speed from Kevin Hansen – enabled the latter to sweep around the outside of his two countrymen on lap four to assume a lead he would not subsequently relinquish.

Showing just how much the result meant to him, the winner fought back tears after exiting his car in parc fermé, while Timmy Hansen withstood the pressure of Kristoffersson all the way to the chequered flag to seal a one-two for the Swedish outfit and get Hansen World RX Team’s season off to the perfect start.

Although Kristofferson was disappointed not to win, the pace he showed throughout the weekend proved that the Audi driver will once again be a force to be reckoned with this year, while Szabó’s fourth-place finish brought some consolation to GRX-SET, after team-mate Niclas Grönholm found himself spat off-track at the beginning of the second semi-final.

René Münnich reached the final for the first time in his World RX career and ultimately wound up fifth for ALL-INKL.COM Münnich Motorsport, but there was less fortune for team-mate Timo Scheider, who was fast and feisty during the qualifying stages and sat third in the intermediate standings only to be squeezed into the barriers on the opening lap of his semi-final. At the start of his first full season in World RX, meanwhile, Kevin Abbring showed flashes of real form in UNKORRUPTED’s Renault Mégane on his way to sixth.

“This means so much to me – my first proper World RX win. I’ve been waiting for this moment for a long time and I’m so, so happy. I knew from pre-season testing that I had a great car underneath me and I’ve worked so hard to up my game, and that has paid off. Johan put up a big challenge this weekend and really made us fight for it, but I got my chance and knew I had to take it. Keeping him behind me in the semi-final was absolutely key.

“When I was standing on the podium, I looked to my left and to my right and thought, ‘these guys have won four world championships between them, and I’ve just beaten them both’ – that was such a cool feeling. What an amazing way to start the season! This isn’t the first time I’ve led the world championship, but this year, I don’t plan to let it go…”

“I’m super proud of Kevin – I know how hard he is working and how much he is improving, and he did a fantastic job. Both of us kept our cool through qualifying, and we had a plan for how we wanted to come out of the first corner in the final, which we executed perfectly.

“Johan has been incredibly fast all weekend, and to hold position, we knew we had to cover off his joker strategy. Unfortunately, I then lost some time behind Szabó and it was so close between Kevin and me when he emerged from the joker, but from that point on, I had his back. This is a team victory, and a one-two finish is a fantastic result at the beginning of the season – a big win for our family.”

“If you had offered me a podium after the penalty in Q1, I would definitely have taken it, but with the pace we have shown here, of course we were hoping for a bit more. I didn’t want to risk too much in the semi-final and final, so I tried to drive aggressively while remaining fair, and ultimately, there was no way through.

“The team has done a great job and the car has been fantastic, which is obviously encouraging looking forward, so we just need to keep our heads up and make sure we stay on our toes, because this weekend has proven once again that anything can happen in rallycross. The fightback begins at Höljes!”

Guillaume De Ridder was the dominant force in the all-new FIA RX2e Championship, as the Belgian – three times a top three championship finisher in the series’ RX2 predecessor – won every race he started in Barcelona.

After completing a clean sweep through the qualifiers, De Ridder fended off Jesse Kallio in the first semi-final and then simply drove away from his pursuers in the final, aided by an opening lap tangle that delayed Kallio and took out fellow front-runner Fraser McConnell. Ole Henry Steinsholt secured the runner-up spoils, with Patrick O’Donovan an elated third from the back of the grid, just ahead of local hero Pablo Suárez. 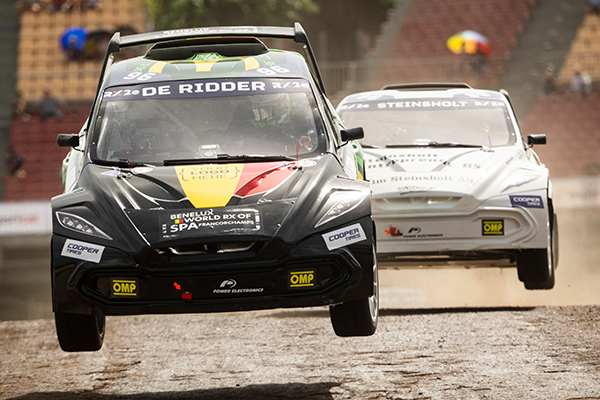 Yury Belevskiy picked up from where he left off in Barcelona nine months ago, as he took the opening honours in the FIA European Rallycross Championship’s RX3 category. Last year’s highest scorer registered maximum points from the weekend to get his title bid off to the perfect start, but he was pushed hard by hugely impressive newcomer Kobe Pauwels in another Volland Racing Audi A1, as the Belgian excelled on his international debut in top-flight rallycross.

Pauwels found himself out-of-luck in the final, however, after a first corner tag sent him sideways and dropped him to the tail of the field. Timur Shigabutdinov gratefully picked up second place having battled back from an accident on the first day, with Zsolt Szíjj ‘Jolly’ rounding out the rostrum in third – by some margin the finest result of the Hungarian’s career – following a penalty for Marat Knyazev for the early contact with Pauwels. 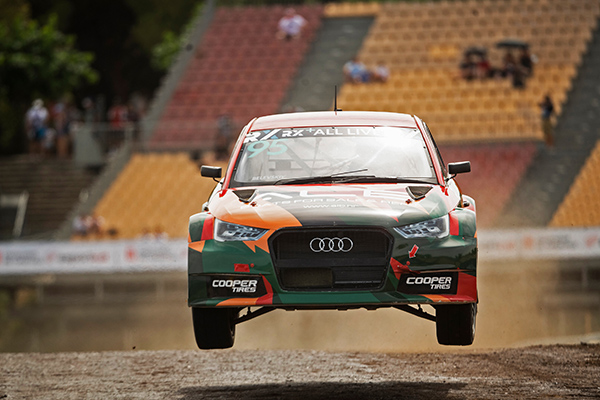 The 2021 FIA World Rallycross Championship campaign next moves on to the iconic Höljes circuit for World RX of Sweden on 20-22 August, which will feature a bumper bill of action with all four series – World RX, RX2e, Euro RX3 and the seasonal debut of Euro RX1.